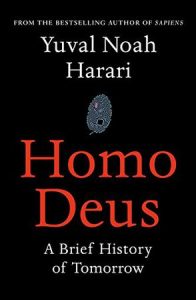 War is obsolete. You are more likely to commit suicide than be killed in conflict.

Famine is disappearing. You are at more risk of obesity than starvation.

Death is just a technical problem. Equality is out – but immortality is in.

What does our future hold?

Dr Yuval Noah Harari has a PhD in History from the University of Oxford and now lectures at the Hebrew University of Jerusalem, specialising in World History. Sapiens: A Brief History of Humankind, published in 2014, has become an international phenomenon and is published in nearly 40 languages worldwide. It was in the Sunday Times bestseller list for over six months in paperback, and was a New York Times top ten bestseller.