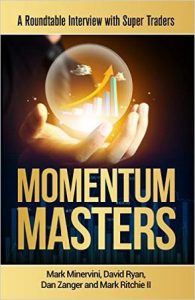 130 real questions from real traders answered by Mark Minervini, David Ryan, Dan Zanger & Mark Ritchie II – four of America’s top momentum investors. Mark Minervini returned 36,000% – a 220 percent average annual return with only one losing quarter. He won the U.S. Investing Championship with a 155% return. Mark is the Author of the best-selling book Trade Like A Stock Market Wizard; How to Achieve Superperformance in Stocks in Any Market. He is featured in Jack Schwager’s Stock Market Wizards: Conversations with America’s Top Stock Traders. David Ryan is a protégé of the legendary William O’Neil and a former money manager at O’Neil & Co. He won the U.S Investing Championship three years in a row, scoring triple-digit returns every year – his total return was 1,379%. David is featured in Jack Schwager’s Market Wizards: Interviews with Top Traders. Dan Zanger turned $11,000 into $18 million in less than one-year during the late nineties. In two years, the former pool contractor’s personal trading account ballooned to $42 million! Mark Ritchie II is the son of the legendary Mark Ritchie (Market Wizards, God in the Pits). He achieved a +100% return in his own trading account in less than 6-months to win Mark Minervini’s 2010 Triple-Digit Challenge. Since then Ritchie II is up 540% – his total return since 2010 is over 1,000%.