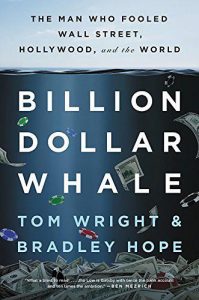 In 2009, a chubby, mild-mannered graduate of the University of Pennsylvania's Wharton School of Business named Jho Low set in motion a fraud of unprecedented gall and magnitude--one that would come to symbolize the next great threat to the global financial system. Over a decade, Low, with the aid of Goldman Sachs and others, siphoned billions of dollars from an investment fund--right under the nose of global financial industry watchdogs. Low used the money to finance elections, purchase luxury real estate, throw champagne-drenched parties, and even to finance Hollywood films like The Wolf of Wall Street.

By early 2019, with his yacht and private jet reportedly seized by authorities and facing criminal charges in Malaysia and in the United States, Low had become an international fugitive, even as the U.S. Department of Justice continued its investigation.

BILLION DOLLAR WHALE has joined the ranks of Liar's Poker, Den of Thieves, and Bad Blood as a classic harrowing parable of hubris and greed in the financial world.

Tom Wright was one of the first journalists to arrive at the scene of the raid in which Navy SEALs killed Osama bin Laden. In 2013, he spearheaded coverage of the collapse of the Rana Plaza factory in Bangladesh, which killed over 1,000 people, earning the Wall Street Journal a Sigma Delta Chi award from The Society of Professional Journalists. He is a Pulitzer finalist, a Loeb winner, and has garnered numerous awards from the Society of Publishers in Asia, which in 2016 named him "Journalist of the Year." He speaks English, Malay, French and Italian.

Bradley Hope has worked for the Wall Street Journal for the last four years, covering finance and malfeasance from New York City and London. Before that, he spent six years as a correspondent in the Middle East, where he covered the Arab Spring uprisings from Cairo, Tripoli, Tunis, and Beirut. He was detained by authorities in Bahrain, reported from the front lines of the Libyan civil war, and has been teargassed in raucous Egyptian protests. Bradley is a Pulitzer finalist and a Loeb winner, and also author of Last Days of the Pharaoh, a chronicle of the final days and hours of the presidency of Hosni Mubarak.