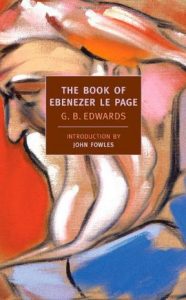 Ebenezer Le Page, cantankerous, opinionated, and charming, is one of the most compelling literary creations of the late twentieth century. Eighty years old, Ebenezer has lived his whole life on the Channel Island of Guernsey, a stony speck of a place caught between the coasts of England and France yet a world apart from either. Ebenezer himself is fiercely independent, but as he reaches the end of his life he is determined to tell his own story and the stories of those he has known. He writes of family secrets and feuds, unforgettable friendships and friendships betrayed, love glimpsed and lost. The Book of Ebenezer Le Page is a beautifully detailed chronicle of a life, but it is equally an oblique reckoning with the traumas of the twentieth century, as Ebenezer recalls both the men lost to the Great War and the German Occupation of Guernsey during World War II, and looks with despair at the encroachments of commerce and tourism on his beloved island.

G. B. Edwards labored in obscurity all his life and completed The Book of Ebenezer Le Page shortly before his death. Published posthumously, the book is a triumph

of the storyteller’s art that conjures up the extraordinary voice of a living man.

“Imagine a weekend spent in deep conversation with a superb old man, a crusty, intelligent, passionate and individualistic character at the peak of his powers as a raconteur, and you will have a very good ideas of the impact of The Book of Ebenezer Le Page …It amuses, it entertains, it moves us…” – The Washington Post

“A true epic, as sexy as it is hilarious, it seems drenched with the harsh tidal beauties of its setting…For every person nearing retirement, every latent writer who hopes to leave his island and find the literary mainland, its author–quiet, self-sufficient, tidy Homeric–remains a patron saint.” –Allan Gurganus, O Magazine