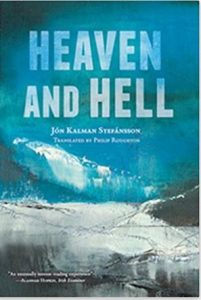 Jón Kalman Stefánsson is the winner of the Icelandic Prize for Literature and has been nominated three times for the Nordic Council Prize for Literature. Heaven and Hell, is a perfectly formed, vivid and timeless story, lyrical in style, and as intense a reading experience as the forces of the Icelandic landscape themselves. Der Spiegel said it was “like an oyster—a glinting treasure in a rough shell.”

In a remote part of Iceland, a boy and his friend Barður join a boat to fish for cod. A winter storm surprises them out at sea and Barður, absorbed in “Paradise Lost”, succumbs to the ferocious cold and dies. Distraught from the murky circumstances of Barður’s death, the boy leaves the village, intending to return the book to its original owner. The extreme hardship and danger of the journey is of little consequence to him—he has already resolved to join his friend in death. But once in the town he immerses himself in the stories and lives of its inhabitants, and decides that he cannot be with his friend just yet.

Phil Roughton is the translator of, among others, the works of Halldór Laxness and The Islander, a biography of Laxness by Halldór Gudmundsson (MacLehose Press, 2008). He lives and works in Reykjavik.