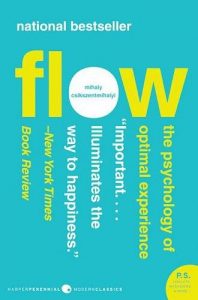 You have heard about how a musician loses herself in her music, how a painter becomes one with the process of painting. In work, sport, conversation or hobby, you have experienced, yourself, the suspension of time, the freedom of complete absorption in activity. This is "flow," an experience that is at once demanding and rewarding--an experience that Mihaly Csikszentmihalyi demonstrates is one of the most enjoyable and valuable experiences a person can have. The exhaustive case studies, controlled experiments and innumerable references to historical figures, philosophers and scientists through the ages prove Csikszentmihalyi's point that flow is a singularly productive and desirable state. But the implications for its application to society are what make the book revolutionary.

Mihaly Csikszentmihalyi is a Hungarian psychology professor, who emigrated to the United States at the age of 22. Now at Claremont Graduate University, he is the former head of the department of psychology at the University of Chicago and of the department of sociology and anthropology at Lake Forest College. He is noted for his work in the study of happiness and creativity, but is best known as the architect of the notion of flow and for his years of research and writing on the topic. He is the author of many books and over 120 articles or book chapters. Martin Seligman, former president of the American Psychological Association, described Csikszentmihalyi as the world's leading researcher on positive psychology. He once said "Repression is not the way to virtue. When people restrain themselves out of fear, their lives are by necessity diminished. Only through freely chosen discipline can life be enjoyed and still kept within the bounds of reason." His works are influential and are widely cited.